So….I skipped a week, but that’s okay! It’s been super busy here and haven’t had a chance to blog. Between managing people, getting office work done, and getting out to all the chimps on a daily basis, myself (and Anne) have been working most days until 8PM, which is super late here (and pitch black)!

I have been working on old records, and having the not-so nice job of reviewing post-mortem pathology reports. There is a mystery disease here which has been affecting the chimps for many years and it’s my job to solve it, with the help of many international collaborators. Much research has been done to date, so it’s time to pick up where we left off and continue onwards. But first, my job is to find out where we left off, which takes some digging! Finished my preliminary report (finally) which means I can start to get on with the day to day animal stuff more easily. Yesterday babies Joe and Ratch had their final health check and all looks great! So they will be out of their 3 month quarantine and free to start integrating with our other quarantine babies to form a small social group.

So I’ve finally started driving independently and the girls (of which there are several new ones, yet again!) decided that they wanted to go deep into town to a fancy French supermarket, rather than the local supermarket we usually go to 10 minutes down the road. You can pretty much find most North American and European items in the supermarkets here – although one of the new team members was very disappointed that the market was not a ‘local African market’ and everything was imported. Welcome to Sierra Leone! But I digress, this story is about the car (and a 4 hour road trip for groceries).

Here, the horn is life. With dogs, chickens and motorcycles weaving in and out of traffic, oncoming lights being blinding, little to no streetlights depending on the road, windshield wipers leaving stains and adding to the blindness, and black people at night appearing out of nowhere – a cautious approach with lots of honking allows you to drive safely. So firstly, we are stuck in traffic for about 2.5 hours on the round trip, which tested my limits of clutch and first gear mastery. But then the horn gets stuck. Initially it stays on until I wiggle it and it releases. The next time it stays on longer and is more difficult to release, and people start staring and honking back. The next time was the car’s limit – there was no turning back from this horn, as we climbed a super steep hill in a quiet neighbourhood at 10pm, horn ablazing the entire way, lights flashing on and off as I try and release the horn and not stall the car. BEEEEEEEEEEEEP WAKE UP CAUSE WE HAVE NO BRAAAAAKESSSSSSSS BEEEEEEEP was what it probably looked like to most people. We pulled over and stopped in order to shut off the damn thing and not go another 10km like complete fools. At first it was hopeless, but eventually we found silence…and then the car wouldn’t turn on. But alas, we got it to work eventually, and made it home. The whole way home, the girls had strict instructions to not touch the horn, and that they would yell ‘toot’ instead. Well, you can imagine how that went. Ironically upon our return, the horn now makes no sound. Gorilla (a chimpanzee) surveying his territory

In other news, I got my laundry back (which is normally uneventful) from one of our staff this week, and noticed something was slightly different. Well, turns out my t-shirts have now become see-through dresses due to extensive stretching. I’m not sure what his handwashing technique is or why this time was different from the rest, but we shall mayyyyyybe have to review it. I mean, thanks to Justin Bieber, knee-length t-shirts are now in style, but that doesn’t mean I want to look like that!

I thought I would also introduce you to Sierra Leonian food today. Every day we have lunch prepared for the staff and it rotates between 4 different menu items, all with small fish inside (and a veggie version as well) and all served with rice. Cassava leaves (or as someone calls it, donkey poop), a literal green viscous mush, sweet potato leaves in palm oil (also called Crain Crain), palm oil stew (literally just a sauce with some cabbage), and black eyed peas – my personal favourite and the only substantial lunch – luckily beans day is twice weekly! All of them taste great, but are super spicy, as Sierra Leonians love their peppers. Some days we are eating oil with stuff inside, and other days hot peppers with oil and stuff. At least there’s some variation! Gari is another local food which is fermented cassava turned into a powder.

Lovetta, the cook, came to me early one morning to frantically tell me the supplier (Bomba!) forgot to buy cabbage and it was palm oil stew day but she can’t make it without cabbage. Why? I have no idea, its literally oil and spices. Anyways, I asked if she had other food (which she must), and she finally agreed to use the beans for today’s meal, even though beans day is tomorrow and she will use them all (she was very hesitant about this idea of changing the weekly menu). The next day, she calls me super early in the morning to tell me that she used all the beans yesterday and now doesn’t have cabbage for palm oil stew day so she can’t cook today. And so the conversation started again…

Speaking of Bomba, we have a serious communication issue. Bomba says yes to everything, even when it’s not a yes or no question. It’s a quiet, soft spoken, ‘yes’ of acknowledgement, even when she has no idea what you’re saying. Sometimes the ‘yes’ will occur, then 2 minutes later a big ‘HUH???’ or ‘WHAAAAAT?” after it was processed. I asked her to buy a dustpan for sweeping and a dish drying rack, which after asking her and many other people, found out it is referred to as a dish basket. She brought back a dustbin, and a laundry basket. The next time we corrected her, and asked again for the dish rack, which upon further clarification is called a ‘plate blind’ or ‘plate drain’ in Krio. I made it very clear she bought the wrong thing last time, and showed her a sample of what we wanted. Well, she brought back another laundry basket…so, we’ll have to work on a new communication system. Or maybe fruit stands are more her thing. 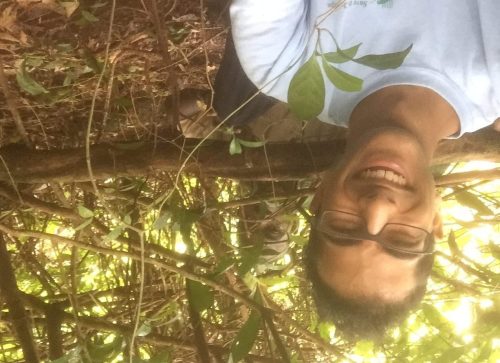 Literally crawling through the bush

Finally, yesterday I had my first real African bush experience since arriving here. We decided to join the outreach team going into the chimp enclosures to search for a toxic plant we are suspecting in our disease investigation. The enclosures are 4-8 acres in area, surrounded by a fence that is not square but polygonal and curvy. As we don’t want to further destroy the small forest the chimps are provided, we avoided use of the machete and followed transects through the dense undergrowth. On all fours, it is barely passable. Every few hundred meters you may find a clearing where you can stand up and breathe. The forest is so thick and so low, and everything has thorns and catches your skin or clothes or trips you. Vines upon vines, with plants like the ‘razorblade’ that sticks to you with glue and then starts cutting you. How the chimps naturally just barrel through this undergrowth I have no idea. But I won the prize nonetheless for most toxic plants identified and removed, the prize of honour and pride!!

That’s all for now, below is another pic of a new Godzilla spider eating a beetle larger than itself! 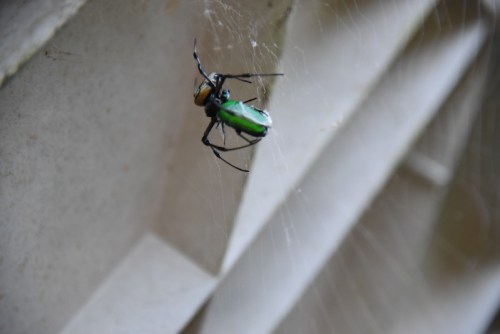 Hi Izzy,
Great blog…I feel like I’m experiencing being in the the bush right there with you.
Happy Thanksgiving!
Heidi

This is absolutely hilarious Izzy. What if you drew Bomba pictures of what you would like her to get? Hope the beans are delicious and you get an extra helping during Thanksgiving. looking forward to hearing more about your adventures! Lots of love, d.

lLouise and Ron and our three ShihTzus (Macauley-Bannon and Tyte)

Hi Izzy: This will certainly come as a surprise to hear from us. Last March we adopted a black and white rescue Shih Tzu suffering from Cushings. And for a very short time you became her vet. We were extremely pleased with you and a little sad that you had left. At our age we have come across a lot of vets, let me tell you that we found you to be TOP Notch. Brooke is doing very well with only 1 pill every other day. She learned very quickly from her 2 brothers how things are done in her new home.

The descriptive write-ups of your experiences are amazing and some of your travels into town certainly hilarious. You have an extremely good sense of humor which was something we liked very much about you. We are looking forward to many of you posts and we must say your return (hopefully you will be back at the clinic next year). It was only by chance that we saw your blog.