Of course it’s been awhile again, and lots of news to share. I’ve been thinking about writing for weeks, but as they say in Salone ‘Naw easy’ – I find I keep passing out after work!

First off, Suzie had her baby, and it’s a healthy 1 month old now! Her name is Sonia, though it took 3 weeks for the caregivers to choose a name. She was also born on one of the most eventful days of Tacugama history. I call it the day of 3 escapes, 2 from the fence and 1 from the womb! In the morning, we discovered Abu (chimp) had caused some tension in his group and when they ganged up on him he managed to get out of the electric fence. Luckily he’s not an adult yet and was able to be coaxed back (after several hours) with some gentle coersion and well, food. The day went on as usual after lunch, until we heard that Chico refused to come in for the night – little did we know, nobody had actually seen her until most staff were gone for the day. So, here I am, in the office, hearing Suzie a few hundred metres away sounding like she’s giving birth. I start heading there to see what’s going on, and hear that Chico is outside the fence, between me and Suzie. So naturally, I do what any other chimp vet would do…HIDE. Luckily I was close to a shelter and locked myself in. Also luckily, the staff hadn’t left the grounds yet and came back to help. Eventually Chico jumped back into the fence on her own, and I continued on to Suzie, who was silent now, licking up her afterbirth. Missed it by just 5 minutes!!! Suzie has turned out to be a more than fabulous mother, doing whatever it takes to protect her baby. 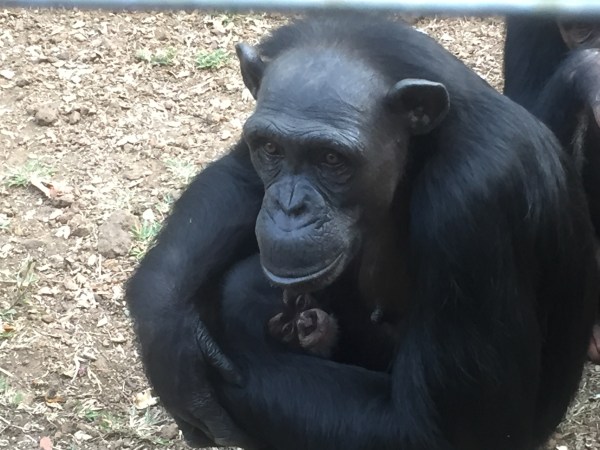 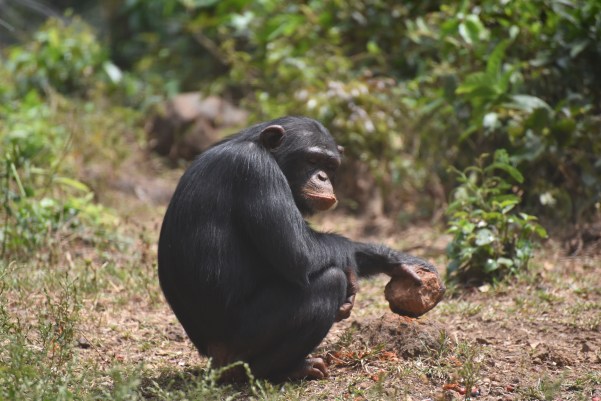 We had another small scare with Kouze, who had some bloody diarrhea in the same week and started going off food. It’s getting busy here in the veterinary department! Anyways, we were lucky to have 4 vets around – me, two vet volunteers, and one of the previous vets from Tacugama who is here doing some research. He ended up having amoebic dysentery, and since he refused to take oral medication, we ended up anesthetizing him to tube feed him his meds, run bloodwork, and get some supportive care treatment on board. Within 2 days he was on the road to recovery (yay!) and taking his meds regularly. What a good boy!! 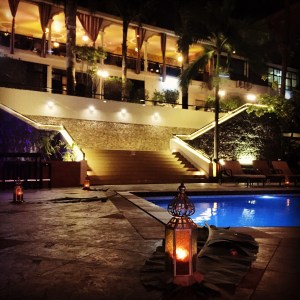 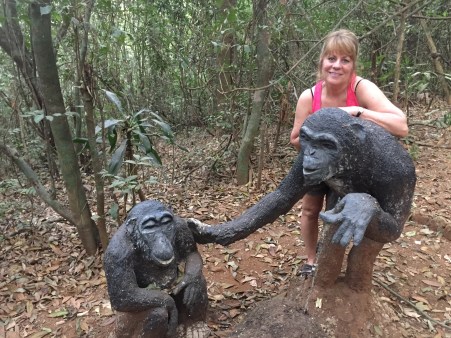 Laura with some chimps, hehehe

Life has been relatively uneventful until this past week when I received my 2nd visitor to date! Way back last July, my coworkers threw me an incredible and inspiring going-away party, the memories of which will stay with me forever. It was African-themed, and hosted at Laura’s farm, complete with late-night hot tub conversations until 2am. It was there that I learnt that Laura’s dream was to come to Africa and that she was also a huge fan and collector of African artwork. Half-jokingly (well maybe less than half) I told her to come and visit, but in full seriousness it became an idea and a reality. Laura was able to make it here for 10 days only (just starting to get comfy!) but she stayed true to her proposition of visiting me, unhindered by many barriers, and needless to say, we had a blast! 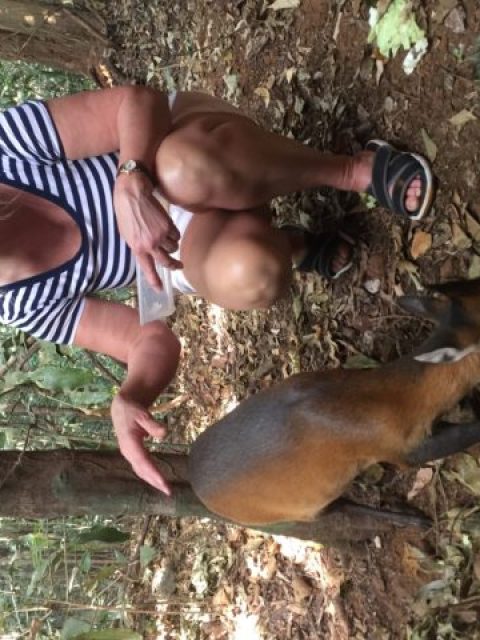 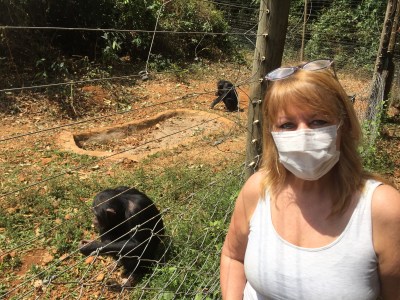 Well, I guess Laura and Jessica made it to Africa together after all! (That’s Jessica in the background) 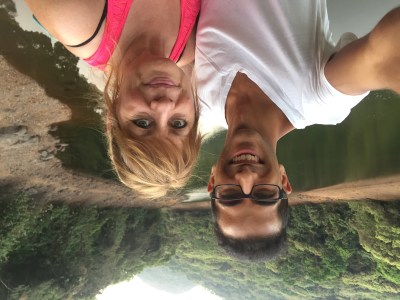 An “extreme” hiking adventure…where we found nothing

First time in Africa, a country girl fresh outta Cobourg, not knowing what to expect when she got off the plane – I’d say she did pretty well! There was definitely some culture shock (okay, more than some) – but every moment was fascinating, every person she met was touched by her energy and also left a mark on her. I am incredibly happy to have hosted such a wonderful person, to have been a small part of facilitating her lifelong dream, and to watch as her world exploded in awe every day. 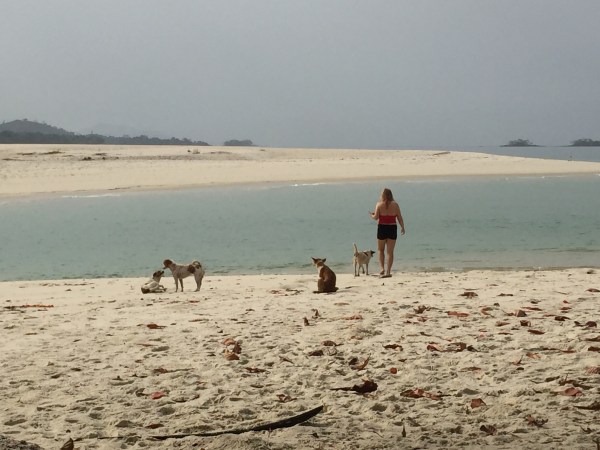 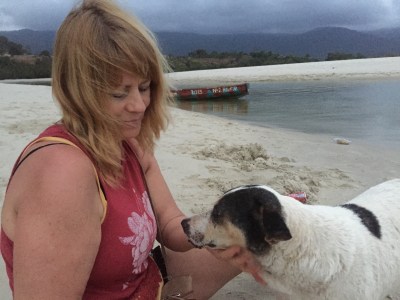 Falling in love with the strays 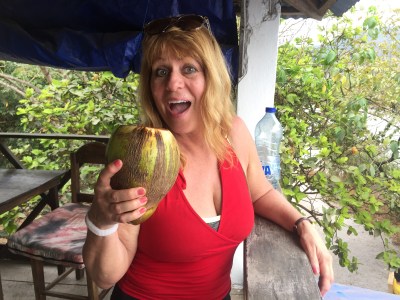 “Fresh coconut? Please buy my fresh coconut! I can even make it into a flower cup when you’re finished!” – Fresh coconut entrepreneur 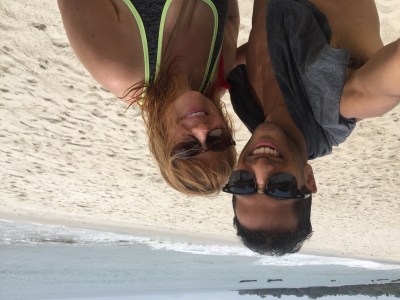 We hit up the beaches, made some enrichment for the chimps, took the babies to forest school, went for some fancy dinners, and even neutered a cat (Laura, you neutered a cat in Africa!!!)! Most of all, Laura fell in love with our rescued duiker (forest deer), Kathy aka Katherine Louise. I’m sure if it was possible she would have gone home in a suitcase with Laura and become the girlfriend of Huck, Laura’s deer!!! But one of the highlights was going to one of our staff’s ‘concert’. On Valentine’s Day, Franklyn, stage name ‘Badeye’ was hosting a ‘concert’ with some ‘special guests’ at a community center near the beach. It was set for 8, but we arrived fashionably late with a car full of our staff, around 9:30, expecting Africa/Salone time. Of course, we were the first to arrive, and the place was empty, minus the DJs blasting music so loud you can’t hear yourself think. About 5 people were dancing the night away, but we couldn’t go home because we were there to support Franklyn. Well he arrived around 11, and said he’d be going on ‘soon’. By 12 the DJs were announcing the performers. They were to come to the DJ booth with their sets. Then a long introduction ending with ‘RIGHT NOW, we will have , coming RIGHT NOW’. And then, the music would go on again. False alarm, This happened about 4 times. I think throughout the night we went and sat in the empty seats about 3 times before migrating back outside. But the fourth one was finally true, and the performance started. First – a hip hop dance crew, pretty fantastic though really at this point the main act was all we needed. Then, some dude lip-syncing a rap to his own track. Then, another dude doing the same. Then, Franklyn goes up, people start clamoring on stage like he’s Beyonce with no security. The ‘crowd’ goes wild, literally wild. He also lip-syncs to his own track, well the microphone was working but it really made no difference. Drunk people were lifting him up in the air, someone was blowing aerosol fire at his face, and 2 songs later it was done. All in all, a great experience, but to top it all off, he comes and apologizes to us for not being a good performance since he was ‘rushed’ and ‘didn’t have time to prepare but wanted to perform so we, the staff, could go home’. Dude, its like 2am now – you had 6 HOURS since you were supposed to perform!!!! LOL. I think Laura learnt the true meaning of African time, and it will probably be very difficult for her to return to a high stress ‘RIGHT NOW’ demanding western work environment!!!! 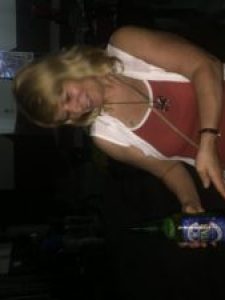 With the largest beer bottle Laura’s ever downed 😉 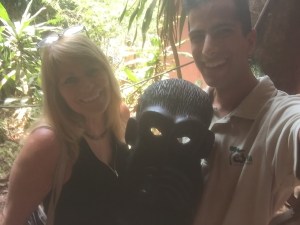 And now, for the title of this blog. I’m walking along at camp and two of the guys are walking like a train, one with hands on the others’ shoulders. In Africa it’s common for men to be very familial with each other, often holding hands as a sign of brotherly love, grinding with each other on the dance floor, etc – and ironically not condemned as homosexual behaviour. Well one of the guys said something to me in Menday, a local language. I asked him to say it in Krio, and he said ‘Come poop on me’ – or at least that’s what I heard. “WHAT?!?!?!?!” “Come popo me” Okay, seriously, what are you asking me to do here….well apparently I am enough of the crew now that I was invited to ‘join the train’ and ‘popo’ him for fun. Maybe I should have asked if he wanted me to popo him ‘right now’.

As we enter March, we are on the lookout for the infamous mystery disease which seems to strike here annually – preparing everything from stocking up meds and supplies, to implementing several strategies to mitigate the effects this year. Here’s to hoping for all chimps to be safe this year – lord knows they deserve it! 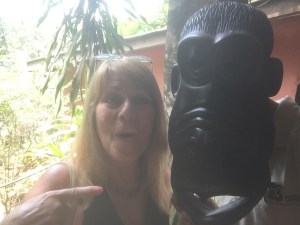 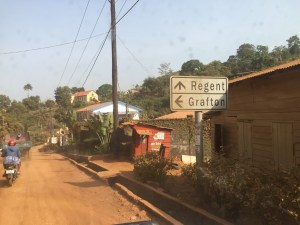 For all the girls back home, I still live pretty close to Grafton!!

Miss you already Laura!!!! Make sure you return to work on African time!!