Blogging has taken a back seat recently. As time goes on my schedule seems to get busier and busier rather than the reverse. There were a several ‘bloggable moments’ in the last few weeks which we shall get to below! 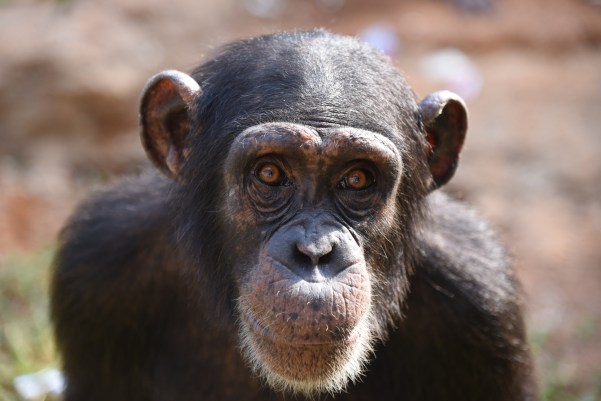 Samson, one of the young boys newly introduced to the forest!

It has been a trying few weeks for me, with one chimp after another getting sick. Luckily so far, we have not had this mystery disease strike as of yet, but it is always in the back of my mind. Zack was the first, he stayed outside for 2 consecutive nights and the keepers reported something was ‘off’ with him. The next day he came in but refused to eat anything. We went several days without him eating, lying in the corner in obvious pain/discomfort, but eventually he did come to the grill and eat or drink slowly until after about a week he was able to rejoin his group fully recovered. The very next day we found an ample supply of blood on the floor of Pieh’s den, and observed her having bloody diarrhea. She too curled up in a corner refusing to come up to the grill to eat or drink anything. She drank water occasionally, but other than that, she ate/drank nothing for 5 days despite our coercion with tasty treats, but also had no more diarrhea. On day 6 it was touch and go, so I made the decision to sedate her, do some diagnostics, and get some fluids and dextrose into her, as well as some medications. She finally got something in her stomach thanks to the munchies post-sedation, but alas on day 7 broke with bloody diarrhea all over again. Changing the treatment regimen, consulting with several vets abroad, and getting her to eat slowly seemed to get her going. We discovered she is an avocado queen and would do anything for avocados or passion fruit! Darting her every day was stressful, but a great sign of how strong she felt, as every day she got better and better at avoiding it. Let’s just say we only got 50% of our darts back…haha. So Pieh was on the road to recovery, and her groupmate, who was separated from her during her illness, had the same bloody diarrhea one morning. Luckily he was still eating and drinking and we were able to medicate him orally. I am happy to say everyone is now fully recovered and back outside! The only one who didn’t make it, unfortunately was another one of the office dogs who developed an acute paralysis and died within 24 hours. It really sucks knowing that you can’t do anything, and to know that in my hands my boss’s family has lost two dogs in the last month. When an animal like a chimp gets sick to the point of potential severe illness, it not only consumes you but really affects you. I spent most of my days trying to coax Pieh to eat something, worrying about what her body was undergoing and if I’d be able to win this battle. Without direct contact, you are limited in diagnosis and treatment, and I began researching like crazy what would be the best possible ‘treat everything’ approach. You are also limited in the ability to physically comfort them in a time of need as I would with a dog. I bonded with Pieh a lot during these days and if anything happened to her I know I would feel miserable, she has such a special and friendly personality. The day I heard her pant-hooting when we arrived with some avocados put a huge grin on my face, and that was the day I knew she was going to be okay. Here I am not anymore treating patients of clients that I am vaguely familiar with or see once a month or two months. While I still feel for them, it is nothing like treating a patient you bond with every day – almost like treating your own pet. And then there is the added layer of the care staff and the director, who are counting on you to save this animal’s life. You want to do all you can, but at the same time you want to avoid intervening and creating the least risk possible, as everyone is so deeply attached to these animals. Finally, in small animal medicine, outside of emergencies, rarely are you saving lives in the immediate sense. Most of the field is focussed on preventive care and treating non-life-threatening problems. To actually have invested all my time and energy for weeks in saving Pieh’s life and been successful is an incredible and humbling feeling. I have to say it was a team effort and everyone did an amazing job. We went out with the team for a drink (the same department had all 3 animals sick!) to celebrate last night in the village where most of our staff live. We showed up to the bar which was closed and had no drinks. They opened for us, but we were instructed to walk down to the road, get our drinks there and bring them back, and then we could use the space. We ended up going to another bar which was so loud that we couldn’t hear anyone so our celebration was ironically quiet conversationally!

In other news, Mariska and I have got a reputation as the partiers here at camp. We went out a few times after weeks/months, but to everyone else it seems like we just keep going! I mean, it is festival season after all… We went to a local ‘carnival’ in Bathurst junction, a little dirt road under a bridge where they wash cars by the river often. Some of the staff were going and invited us as its just down the hill from our camp. As it turns out they had a stage blasting music, palm wine for less than 10 cents a liter, and well, we were announced as special guests from Tacugama about 10 times in an hour! Then, another night, we went to the National Stadium to see Tekno, one of West Africa’s most popular artists! His most popular song, is, well, about his big cassava…anyways…we were told to arrive by 1AM as nothing would happen until 2. Well we did, and we got ‘box’ tickets as it’s a bit safer and usually closer to the stage. The stage was SO far away when we entered, the crowds were all on the other side, and well, our entire section was quite empty. We waited anyways, until 4am, and then people started throwing rocks and urinating on the stage out of frustration….so we left, and apparently Tekno showed up drunk at 5am to a thin crowd, sang two songs and left. We were told afterwards that they agree to pay him a certain amount (this one was $40 000 USD) but he only shows up when he gets the money and they have to sell enough tickets to raise the money on the day before that target is reached. Well, he got his $40k for doing nothing, in a country where that could do so much. Sigh, didn’t even get to hear my big cassava song.

The best experience of all was when we discovered this new ‘fried chicken & burgers’ place near us. Mariska was eager to try it and they had veggie burgers and wraps on the menu so we decided to give it a try. We walk into this Pakistani joint with two classic buffoons behind the counter. One chubby with his feet up on the counter, the other with a GIANT mustache that would put Movember to shame and his head resting on his hands staring off into space. The place is absolutely empty with fried chicken that looks like it was cooked 3 days ago, but two uniformed security guards outside. The guys don’t bat an eye as we walk in. “What’s in the veggie wrap?”
In a thick Indian accent “No”.
“You don’t have it?”
“No.”
“What is the veggie burger made of?”
“No, no weggie no weggie”
“Oh but you have a vegetarian pizza?”
“No…oh yes, pizza we have”
Okay….then Mariska “What is good here?”
“All good all good” says the chubby guy, feet still on the counter, with the classic head nod.
“No, but what do you recommend? What is nice?”
“All nice all nice”
“There’s a pepper on the menu with different levels of peri peri, can I get mild?” “Whaaaaat? Let me see” – as he finally stands up and looks at his menu as though it’s the first time he’s seen it…”OOOOOH NO. This is Peri peri, no levels, all hot all hot!!”
We ended up getting pizza, but the tandoori chicken pizza was definitely week old overfried chicken with barbecue sauce, and the veggie was, well, lacking veggies. LOL! It started getting more popular as the night went on, but as we left, there was a new guy behind the counter – the other guys snuck out of a back entrance without a peep! As I whispered that I wish I got a picture of the previous buffoons, Mariska then goes and asks the new guy for a photo with us…awkwarrrrrd. Next door, there was a ‘provisions shop’ selling toilet seats, jewellery, hats, high heels, really expensive flatscreen TVs, and well, it also included a barber shop. Quite the establishment!

This week was also Khushiali for us Ismailis, the Aga Khan’s 80th birthday – basically our Christmas – and a time to celebrate with the family. Feeling lonely out here, but luckily I have company in that as Nadia was feeling the same. As the only two (Canadian!) Ismailis in Salone, we decided to celebrate by going for biryani at a nice restaurant in town, splurging on ice cream instead of sherbath, and going to an outdoor festival! It was a lovely evening and very happy to be able to commemorate Khushiali over here! Best wishes to everyone celebrating back home!

And finallyyyyyyy…as I write this my fiancé is getting on a plane to arrive here in 5 hours!!!! So incredibly excited and can’t wait to spend the holidays with the love of my life. So here’s to new adventures and memories to last a lifetime.

Wishing everyone a Merry Christmas and Happy Holiday Season!!!!