Wow – things have been a little intensely busy here but can finally say I am getting back to a routine. Due for a much overdue update as usual…since February this time! Yikes. I am happy to report that March (peak season for our unexplained chimp mortality issue here) and April were uneventful. The weather was amazing – sunny, hot and dry the entire time – which made for many trips to the beach!! It has started to rain, and with big thunderstorms at that. Sadly, our solar panels were struck by lighting which seems to have affected both our solar inverter and batteries for all of Tacugama. It’s a huge expense and takes time to diagnose the problem to see how easily it can even be solved. Needless to say, we’ve been living without power in the night for several weeks now, but managing! 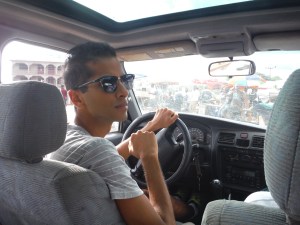 In March, we celebrated International Women’s Day which is a newly adopted public holiday in Sierra Leone. It is nice to see that women are being celebrated in a country where they are still viewed as holding traditionally feminine roles in society. However, women are often seen in positions of authority here (police officers, government positions, etc) which is also wonderful. Unfortunately we celebrated it being on lockdown as we had an escapee chimp headed down the road into town! Luckily after many hours of tracking him, we were able to dart him and drive him (in reverse, mind you – potentially the most adrenaline rushing ride of my life!) safely back to the sanctuary. 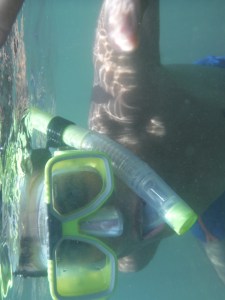 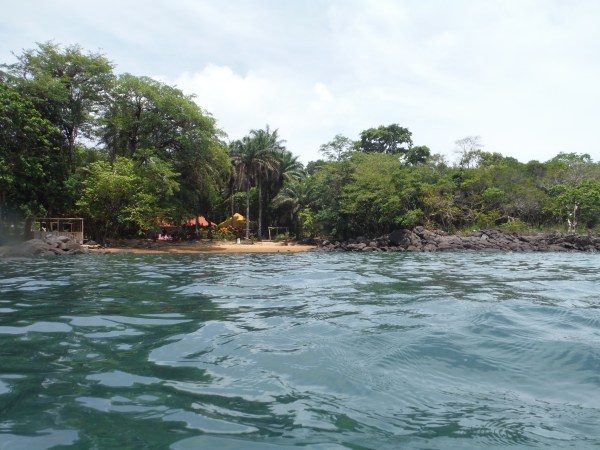 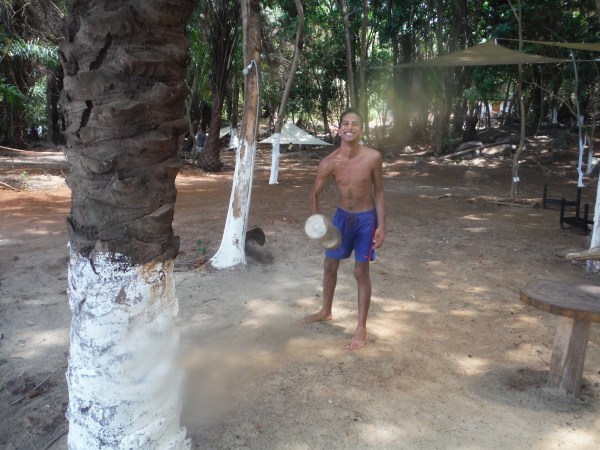 Shortly thereafter, we were able to celebrate Navroz, or Persian New Year. Nadia and I were able to gather a decent crowd of friends to celebrate this important day for us – with some memories of childhood and home. We ordered in some biryani and samosas from a local Indian restaurant, made a mango lassi, and completed the evening with traditional egg painting – though many of our skills left much to be desired!!! 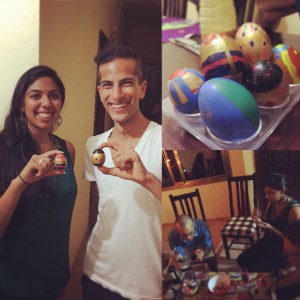 Freetown also hosted its 2nd annual music festival. Held on the beach, there were 2 stages, the main performance stage (mix of pop and hip-hop) and a traditional stage with drums and instruments. A diverse crowd of attendees flooded the beach strip filled with food and drinks from 8PM until the wee hours of the morning (which closer to 5AM than the 2AM of North America!), from locals in ‘Salone dance’ mode, to expats of all kinds. I know every country has their own style of dance, but I think everyone needs to experience Salone dance. There is just something so special and magical about the way people dance here, and it just makes you want to bust a move! I’ve caught myself dancing in the middle of the street all alone on several occasions, as long as you hear even the potential of a good beat! April brought with it some interesting developments. After 7 months of relative success, thinking our message was finally working, we got a call about an abandoned baby chimp in need of rescue. Off our team went to the village in question to investigate. A little boy named Abraham had been to Tacugama just 1 month prior, and upon seeing the team went to inform them of where in the village the chimp was being held. He was so inspired by his visit to Tacugama that he felt compelled to help. Little Jackie was found in the end, in a bathroom stall tied up by a rope – dehydrated, emaciated and with a high temperature. We discovered that she LOVED cucumbers and mangos, but refused all else offered, even milk! Jackie, otherwise known as the cucumber queen, has grown incredibly since that time, and even started taking milk with vigor – even to the point of being slightly overweight now!!! The one time, she was eating a mango and saw me with a cucumber I was trimming for her. She instantly threw down the mango, RAN for the cucumber and started screaming her lungs off! 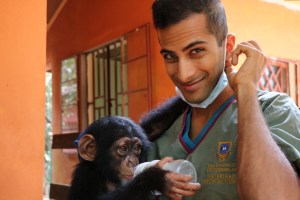 Jackie and Jackson during their health checks

Again, we think, okay, we didn’t reach the one person or people who hunted Jackie’s family to sell her – but at least we’re doing a good job overall. Then another call – our team discovered a 1.5-year old chimp being raised in a local community complex. Coincidentally named Jackson, he arrived just 1 week after Jackie, from a village of about 30 kids that were raising him. Luckily he arrived in much better shape than Jackie and was able to bounce back quite quickly. Today, Jackie and Jackson are together in quarantine, and they’ve both become so independent! Jackie is even trying to run away and play hard to get from time to time like a rebellious 3 year old! 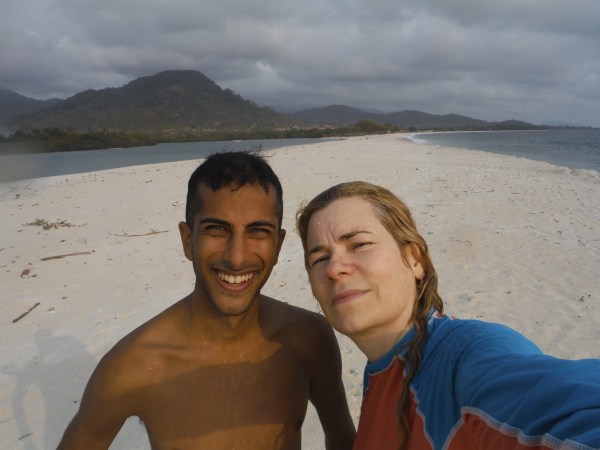 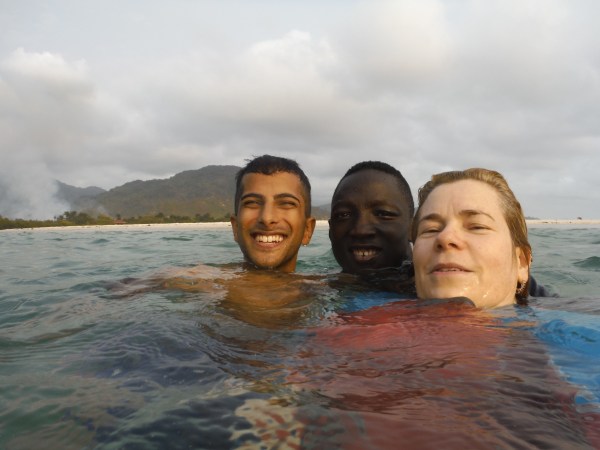 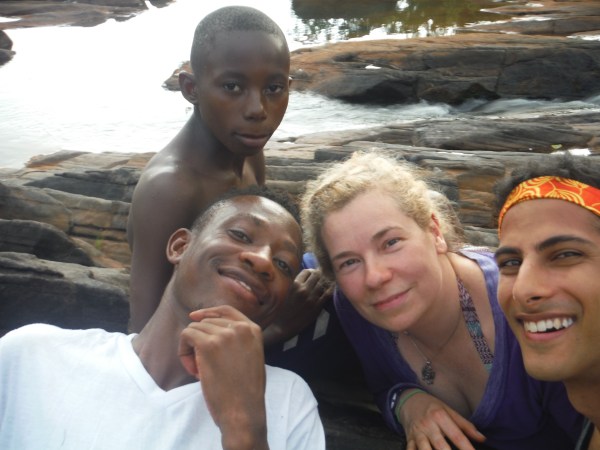 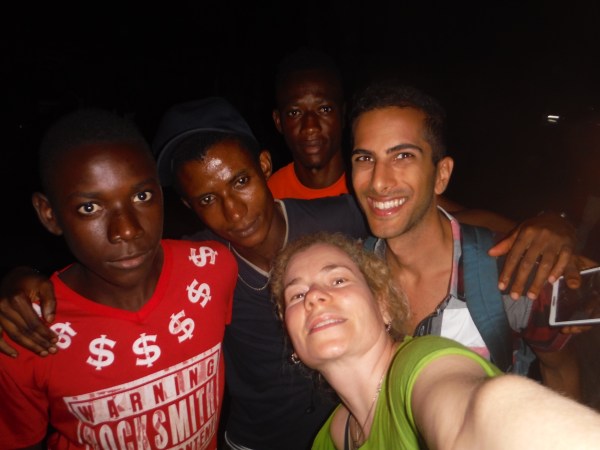 Ingrid arrived around the same time, my dear friend from Toronto. She came to volunteer with Tacugama for a month and it was great to have a familiar face around (and one with vegan treats to boot!). We worked on some ongoing medical projects here, did a few chimp procedures for contraceptive implant placements, and thanks to Ingrid, some of our care staff began training on basic medical technical procedures so they could learn to assist with the chimps. I believe it was a life-changing experience watching her bond with the staff, and some of my local friends at the beach – one of those personalities who makes an impact wherever she goes. We went on a trip to Banana Island, a historical site with connections to the slave trade – mostly for Ingrid to go on a scuba dive to see a sunken Dutch slave ship, but the water had poor visibility that day and no one seemed to know the exact ship location! Still a pretty neat place to see, and we tried breadfrut chips for the first time! The last weekend we spent together at the beach we went on what was a perfect and magical dugout boat ride with some local friends upriver from the ocean to a waterfall (which would be stunning in the height of rainy season…but not so yet!). A serene environment, surrounded by forest and no one but ourselves, singing in the rain, laughing together, and sharing special moments that can never be recreated. This is what life is about! 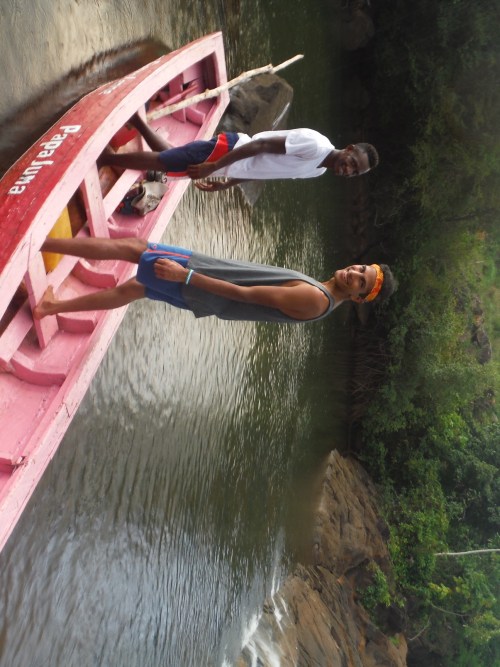 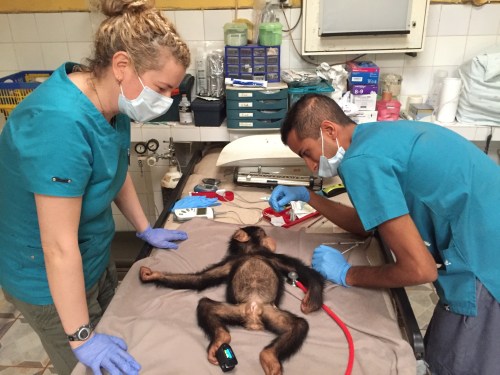 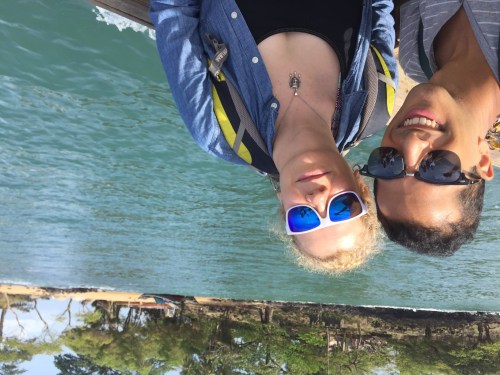 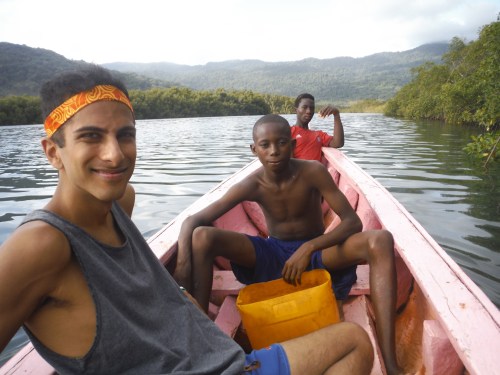 We finally hired a new manager (yay!!) named Aram, a fellow Canadian! Things have been great and he’s settling in quite well. Having him here takes a huge burden off of me after 4.5 months of performing both roles. He’s got a lot of great ideas to carry Tacugama forward and help us increase our profile and funding/tourism opportunities. Funnily enough, he just happened to arrive the same day as a vet student I was teaching, while training him, and supervising volunteers…so, it was a pretty chaotic few weeks! Things have finally settled down, and actually right now it’s only Aram and me at camp – the Canadians have taken over!!! We joined a hike last weekend one on of the trails around Tacugama that I’ve never explored. We went for 3 hours, climbed over a waterfall and into the mountainous terrain. It was absolutely stunning, and we even saw fresh chimp tracks and a chimp nest, amongst other exciting wildlife. I couldn’t feel my legs the next day, but totally worth it!!! We went with our last visitor, our pathologist from Spain. We had some time to sit together and review some cases, diagnosing some conditions that had previously not been described at Tacugama. His presence here has been extremely useful! Luckily, he found some time to relax here away from busy life in Spain. It was while Ingrid was here that I started to learn a lot about myself, perhaps witnessing her experience allowed me to reflect on mine. I started to realize that I have integrated into the local culture, and feel much more at home here than I did 6 months ago (even though I was settled in, most things were still ‘new’). I have friends to hang out with on weekends – sometimes they even come to visit during the workday!! – I joke around with them and with the staff in Krio, I got scored at 70% for my Krio capabilities by our staff cook, and asides from missing people I have little desire to go home or live in a Western society. In fact, when people talk about city life in Europe or North America, the culture shock makes me cringe thinking that I have to live in that world again. Salone has become my home and I have become one with it. I am used to the simple life, with minimal internet/contact with the outside world, bucket showers, and few necessities to live with. Even though our cars break down almost every time we take them out, even though we’ve been living without power at night for the last month and a half, even though clothes in this season become fungal cultures in 2 days, and even though life here can be a struggle, I really don’t miss much. In fact, having lights now seems like a luxury and feels strange when they’re on!!! To that point I walked into the kitchen with a new pair of African shorts, and the staff told me “Una tap na Salone” which basically means – you have naturalized in Sierra Leone, you are one of us, and that they wouldn’t let me go back to Canada. I was so touched by this sentiment, and feel honoured be so accepted with open arms. It will definitely be an incredible challenge to leave this place and go home, for this too now is home, and home is a relative concept. 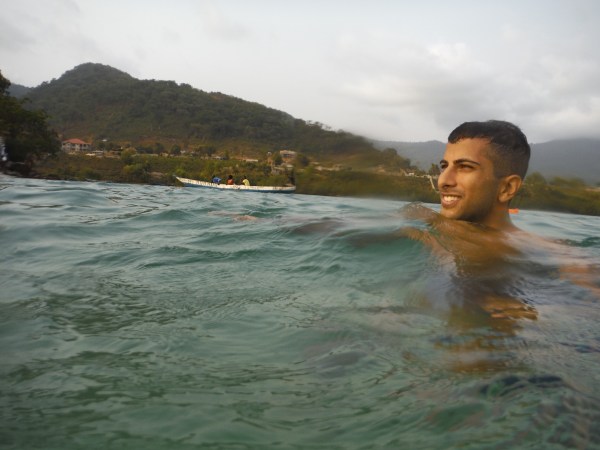 As always, lots of love,

Always interesting to read what you are Doing. You have indeed seemed to meld right in with your surroundings. I am happy for you. ❤️