I can’t lie, I’ve been to a lot of beautiful places. But there’s one here that gets added to the short list that I can describe in no other words except paradise. I keep thinking how fortunate I am to be working amongst apes in Africa, something I’ve dreamed of for years, and a short drive away from paradise on the ocean. Couldn’t get any better. 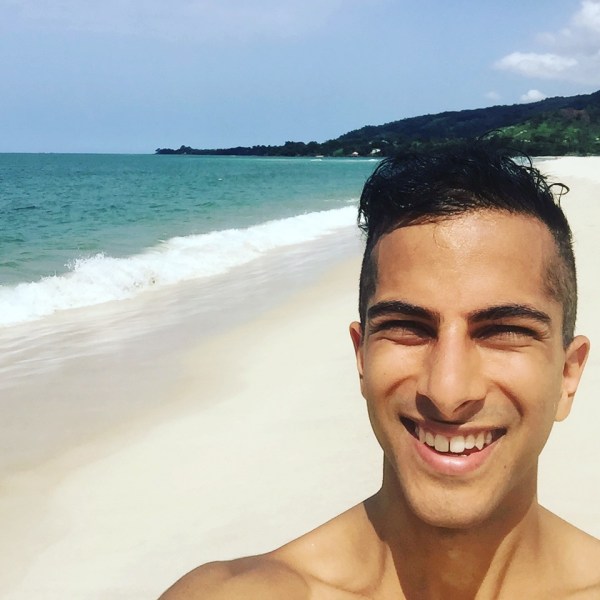 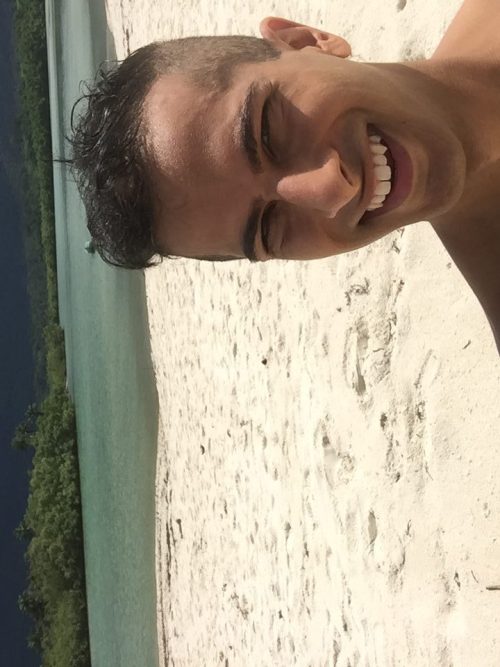 Last weekend was a yoga retreat at a beachfront property on River #2 Beach, nestled between a river and the ocean. When you arrive, you are on a freshwater lagoon which at it’s deepest is shoulder high, and about 100 meters across – where it hits a sandbar, on the other side of which is the ocean. Behind it are mountains of rainforest which end in mangroves at sea level. It is THE perfect setting for yoga, as the rivers drain into the sea on this secluded point. The sun was finally shining in full force for almost the whole day! It’s also incredible how much the landscape changes from dawn to dusk. When we arrived in the morning, the current was coming in from the ocean and the lagoon was full. Crossing the lagoon again in the late afternoon meant fighting a current that was receding back to the ocean, swimming with all your might and staying in the same spot (unless, like in my case, you end up in the mangroves and pull yourself forward!). And a few hours later yet again, the water is almost gone and you are crossing puddles nestled in sand swarming with crabs who scurry into their holes as soon as you walk by. 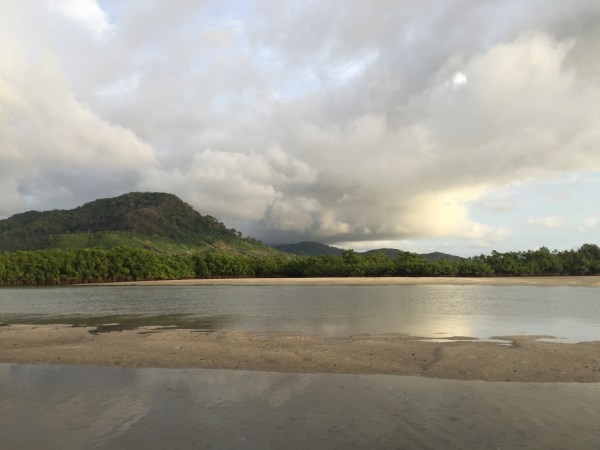 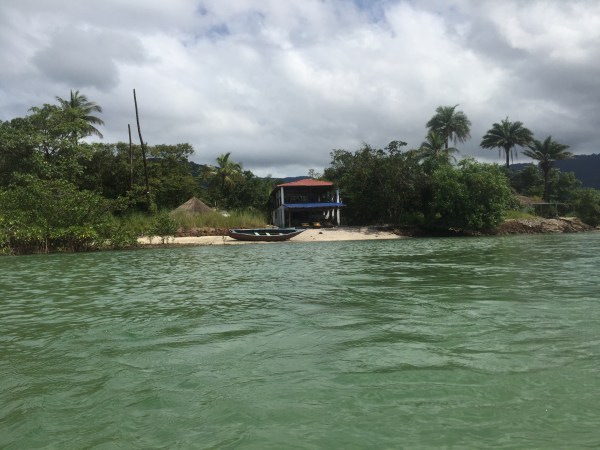 Where we did yoga…

Today I am lucky enough to be back on the other side of the river amongst the local community. A gorgeous and relaxing day which has just ended (actually still going on)  with a dance performance and fashion show from a church group of youngsters that have rented out the beach. First Maryam took to the cat walk,  as teenage girls screamed and flocked to her support. Natasha with the most sassy and regal walk,  drew the biggest crowd and the hopes and dreams of all the guys in the audience. Perhaps her booty which put JLo to shame may have played a role. There are many categories of dress,  the one we observed was casual wear which includes glasses and a briefcase. The guy next to me was hoping for a bikiniwear category. And their speeches – “Distinguished ladies and gentlemen, my name is Natasha, Sierra Leonian by nationality,  West African by geography, tribe of so and so. My hobbies are modelling and reading. Reading increases my vocabulary. Sit back and fasten your seat belts as I do my thing.” Then they strut for 5 seconds as a group of girls chases them with cheers like celebrities. Ironically the men in the competition we’re the least sculpted of all the onlookers. We figured that since all men in this country have the bodies of Greek gods, perhaps the unsculpted are revered as objects of beauty for being different from the norm!

Bomba, I learned this week, is indeed pregnant. Ithought people were just making jokes this whole time but it’s true! The only thing is I’m not sure she knows how pregnant she is. She is travelling with family now ‘in case the baby pops out’ at any time. However, I think she also told someone she is only 6 months pregnant. Only time will tell… She will make an excellent mother saying ‘yes’ to everything! 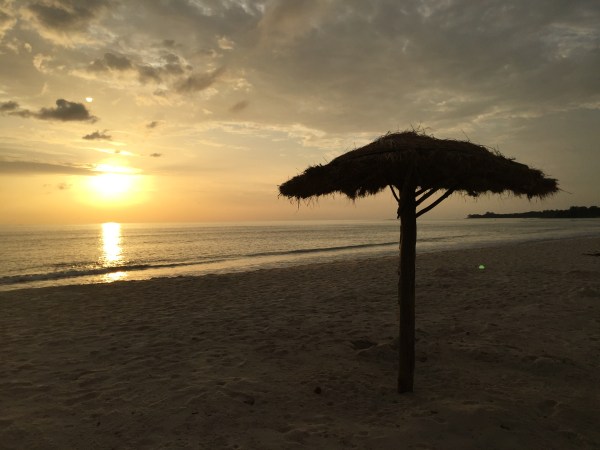 In other motherly news, baby Joko has a rash which looks fungal, of course on his face. He is 1 year old and his mother has a bad reputation of being a very dominant and often aggressive chimp. Luckily she is very trainable and I have begun training her to present her baby without reacting, so I can apply an ointment on his face. After 1 week, we aren’t at that level yet, but she learns FAST! The first day, she instantly understood how to show her baby and move aside. The next day, she learned to let me touch the baby without reacting. We are trying a ‘hands up’ technique now but it’s the first time she’s been frustrated and tried to grab me…so maybe we’ll hold off on this one for a bit. Fortunately or unfortunately, the rash seems to be receding just at the point we are making success. And although mom is trained, the difficulty comes in interacting with baby without baby screaming and mom coming to the rescue! Treating wild animals is not as easy as one might think, especially primate mother-baby combos! 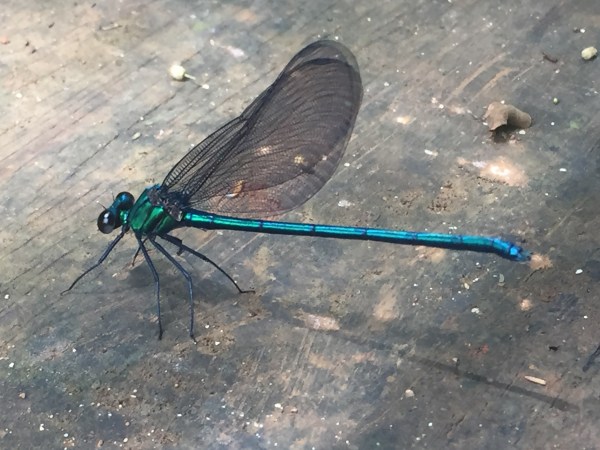 We are also working on repairing an older fence this week and preparing to move a group from the kids stage to the intermediate forest stage. Right now there is a group of 11 adolescent chimps in a playground-like enclosure, and if all goes well, next week they will graduate to a several-acre forest enclosure. Can’t wait to see how they respond to this! Baby Lucky has successfully integrated with babies Joe & Ratch, and baby Matilda has now made friends with baby Sofie. So the babies are also moving on up out of quarantine into their own little group! Stay tuned for Halloween as we have some special “Chimpoween” activities planned that should make for some fun enrichment – apparently Halloween is a foreign thing to both the Europeans and Africans, so I’m on my own for this one! Shout-outs to my bestie Steven for his birthday, I tried out some enrichment on his behalf as well. I gave a sheet wishing him a Happy Birthday to Solo’s group, and Marion ran down and grabbed it. She was so interested and took it up to the platform where she ‘read’ it very carefully, before proceeding to chew it a few times. In the end she crumpled it up and threw it off the platform in disgust. Sorry Steve, Marion and you just aren’t meant to be. She’s waiting for someone to woo her with more than just words! 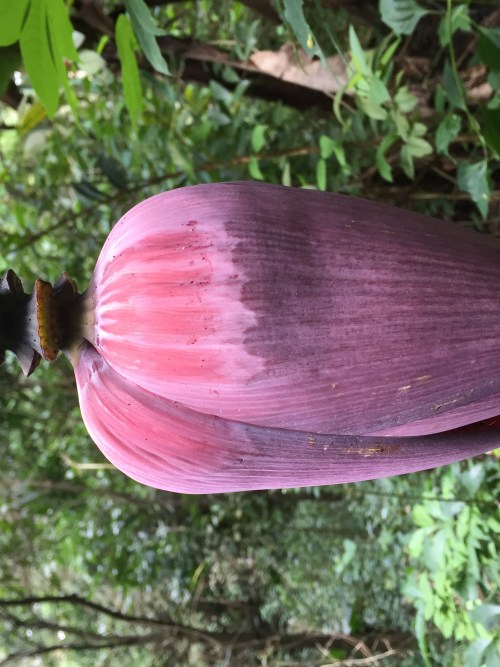 The incredible banana flower – Mom you would love this!!

The moisture is also (slowly) starting to recede, though the weather these days is quite unpredictable and laundry gets soaked by freak storms several times when it’s almost dry! Unfortunately 9 nights out of 10, my mattress and pillow are still damp. Missing the fall colours back home, but really, anything tropical is way better than cold, rain and soon snow – so let’s just say I’m glad I escaped when I did! I’m told soon the moisture gets sucked out of everything by the Sahara sands, but I’ll believe it only when I see it…